The first change with the new edition of the DSM is to combine the formerly separate diagnoses of autistic disorder, Asperger’s disorder, childhood disintegrative disorder, and pervasive developmental disorder not-otherwise-specified into one group with the name of Autism Spectrum Disorder. The stated reason for this was that of reliability and validity. That is, the DSM IV could, to the satisfaction of the committee, distinguish individuals with autism from typically developing individuals. Further, the committee stated that because autism is described by a common set of behaviors that it is best represented as a single disorder. Finally, the committee stated that a single spectrum disorder represents the current state of knowledge regarding the disorder and how it appears clinically to clinicians.

The second change is the combining of the three domains that appeared in DSM-IV (Qualitative impairments in social interaction, Qualitative impairments in communication, and restricted repetitive stereotyped patterns of behavior) into two domains (Social Communication Deficits and Fixed Interests and Repetitive Behaviors). The following rationale were provided: 1) deficits in communication and social behaviors are inseparable and; 2) delays in language are neither unique to autism (i.e., they appear in other disorders), nor are they universal (i.e., not all individuals with autism have them); 3) The changes improved specificity of the diagnosis while not compromising the sensitivity; 4) Increased sensitivity across severity levels of autism; 5) Secondary analyses of data sets support the combination of categories.

The third change is a change in the criteria within the social/communication domain were merged and streamlined to clarify diagnostic requirements. The following rationale was provided. In the previous version of the DSM several criteria measured the same symptom thus giving greater importance to that symptom (social/communication) and the merging of these criteria requires a new approach to them. Secondary data analyses were conducted to determine the most sensitive and specific symptom clusters to facilitate diagnosis for a range of ages and language levels.

Next, there is a new requirement of two symptoms from repetitive behavior and fixated interests be identified. It was also proposed that this change will increase specificity while not decreasing sensitivity. In addition, there is a requirement for multiple sources of information (clinical observations and parent/caregiver report).

These changes represent the current iteration of the DSM-V diagnosis of autism. 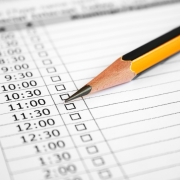 Can Autism Spectrum Disorders Get Worse?

How to teach your child to wait and what you could do before and after telling...

What Constitutes Effective Intervention for Individuals with Autism? The National...
Scroll to top